The Water Beneath Your Feet: An Introduction to Marietta’s Groundwater 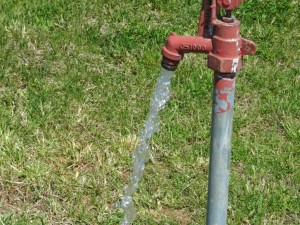 Each day, you turn on at least one faucet in your house, and expect water to flow out of it to aid you in your daily chores — washing dishes, cleaning up after gardening or even getting the kids to finally take that bath. But did you ever think about where that water actually comes from? Sure, it arrives at your house via various pipes and valves from the city of Marietta water department, but in truth the water coming out of your faucet just may be starting its journey in the ground beneath your feet.

Believe it or not, the water in your life isn’t just what you see in the sky as clouds, raining down on you during a spring shower, coming out of the faucet or flowing next to you in the nearby stream. No, in fact, there is another place that water exists, and in some cases it is more abundant than any of the other sources listed above. This water, which exists in the ground, is not surprisingly referred to as groundwater, and it exists in specialized areas called aquifers.

The solid ground beneath your feet isn’t so solid, really. There are gaps, fissures and spaces between the various grains and minerals that make up the rocks beneath your feet. When those spaces become saturated with water or have shown to have the potential to be filled with water, those areas are known as aquifers. One way to think of it is comparing a duster with a dish rag. A duster won’t likely come in contact with too much water, and, in fact, may even repel it. A dish rag, on the other hand, will routinely get saturated with water. The dishrag, in this case, would be considered an aquifer.

In reality, southeastern Ohio and the Marietta area are home to not one, but two different types of aquifers.

The first, commonly known as the Pennsylvanian aquifer system exists far below the surface, in sandstone and limestone deposits that were deposited during the Mississippian and Permian geologic ages, approximately 360 to 250 million years ago. The water in these rocks exists in between the sand grains and limestone fractures, much like they do at the beach after a good long, hard rain. Because of time and the overlying pressure of the land above it, the sediments in these rocks are consolidated (stuck together) in a seemingly solid mass. Water flow through this aquifer is usually somewhat slower than the speed of the water coming out of your faucet, but in the grand scheme of things it is still relatively fast — about as fast as a slow drip coffee maker. This aquifer system is also pretty extensive, extending beneath much of eastern Ohio, Kentucky, Tennessee and into parts of Virginia, West Virginia, Pennsylvania and New York.

The second type of aquifer is much more localized to the southeastern Ohio area, and exists primarily as either loose sand and gravel that was deposited by glacial meltwater in the recent geologic past, or in local stream and river beds. In fact, both the Ohio River and the Muskingum River have significant sand and gravel aquifers associated with them. While they are not as extensive, usually only extending out a few thousand feet from the shoreline of the river, these aquifers yield much more water. This is because the water can flow more easily through the unconsolidated, loose material.

So it stands to reason, then, out of these two different types of aquifers (deep, slow moving water, low yield versus high yield, close to the surface and fast moving water) that the town of Marietta, Ohio would choose the sand and gravel aquifer system. A review of the 2012 water quality report shows that this is true. In fact, there are seven potable water supply wells that have been installed to help supply water to the town.

While it may stand to reason that the water pumped out of the wells travels directly to your house, thankfully it doesn’t. Groundwater, just like everything else in the environment, is exposed to contamination from various sources including fracking, animals, garbage and even microbes, as well as minerals that are found naturally in the environment. So, the city of Marietta water department not only monitors the quality of the water going through the system, but also does what it can to remove or lessen some of the more serious contaminates such as lead, copper, PCE and bacteria. You can find out more about their efforts in the consumer confidence report, found here.

So now that you know that the water you drink comes from the ground beneath your feet, what are you going to do differently?